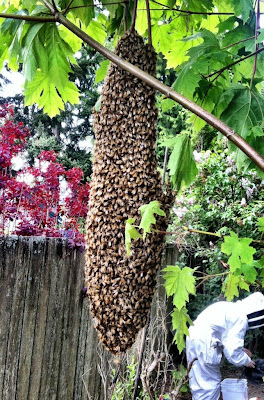 Beekeeping in 2011 was an interesting endeavor for new and experienced beekeepers alike…
For starters the bees “season” was delayed due to the cool weather. New packages of bees weren’t delivered until May (normally this would happen no later than Mid-April). Hives that made it thru last winter were slow out of the gate, and extra feeding was required just to keep them going until foraging plants became available. Swarms occurred from April to August, normally these would stop around June. And hives that had no apparent reason to swarm, swarmed anyway! Speaking of swarms, I caught a real bee-utiful swarm in Burien this year. Pic at left.
Seattle Bee Works expanded hives this year, to 16 hives. The majority of these are placed with homeowners in West Seattle, but a few were placed with friends in far reaching neighborhoods such as University Village, Queen Ann, and Columbia City. This made beekeeping a little more challenging this year- requiring additional equipment prep to maintain 16 hives and the extra drive time to visit all the hives. However, the addition of new hive locations brought with it the chance to meet and become friends with many new “hive host” families. I’ve enjoyed getting to share beekeeping in this way and am thankful that so many people are seeing the joy and benefit of having honeybees in their yards.
All in all the year turned out great and I was even featured in an urban farming segment on the Seattle Channel. Additionally, Seattle Bee Works upgraded our packaging and labels, and expanded distribution of West Seattle Honey to multiple outlets including both Husky Deli and West Seattle Produce. Thank you West Seattle for supporting the bees! 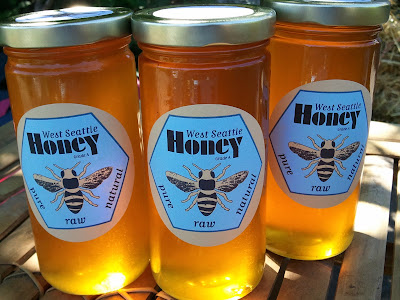